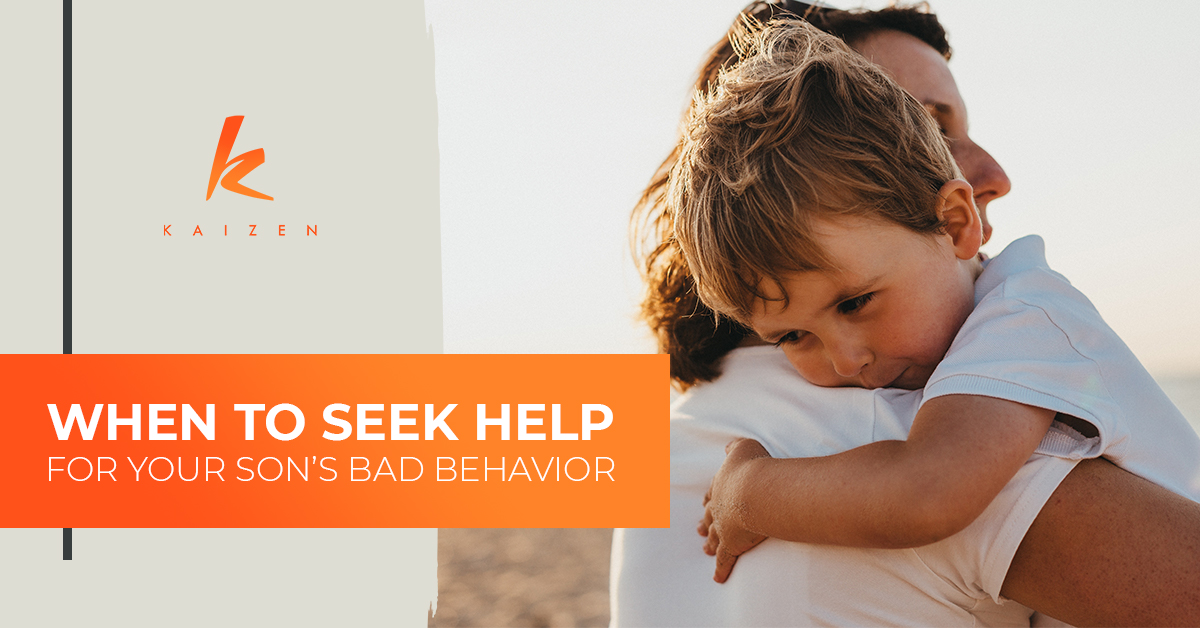 As a parent, you want what’s best for your child, even if that means taking desperate measures to ensure their behavior issues are fixed. But how will you know it’s time to seek help from a behavioral therapist? Many people will write off bad behavior as a sign of puberty or “growing up,” but that’s not always the case. In this blog, we’re going to take a look at some of the top warning signs of abnormal behavior in your son and what you can do about it.

In the meantime, if you have any questions or would like to speak with a behavioral therapist for boys, don’t hesitate to contact Kaizen Academy. We are a residential treatment program located outside of Provo. Although our primary focus is on treating abnormal sexual behaviors such as sexual addiction and pornography addiction, we are able to treat all behavioral issues.

In order to differentiate between normal and abnormal behavior in your son, it’s important to know a little bit about child development. Keep in mind, however, that what may be normal behavior for a preschooler may be a warning sign for a young teenager and vice versa, so it’s always best to consult with a behavioral therapist rather than making any assumptions.

Defiant behavior can manifest itself in a lot of ways depending on age. Although it’s normal for younger children, specifically preschoolers to have occasional temper tantrums, this should not be a regular occurrence in older children or young teens. If your son has trouble controlling his frustration or anger and has frequent emotional outbursts, it may be time to seek help.

One of the first warning signs for many parents is not the child’s bad behavioral itself, but the way they react to discipline. Some boys will react indifferently to any discipline or criticism or just ignore it outright. Many parents become frustrated in situations like this and scold their children. However, here at Kaizen Academy, we stress the importance of reinforcing positive behaviors in a healthy environment, rather than creating a hostile environment for the child.

Behavior That Interferes With School

Although it’s important to understand the implications of the way your son interacts with you at home, you should also be aware of his behavior at school. Some children may exhibit no issues interacting with you but may act in defiance with teachers when it comes to their behavior. This could also include behaviors that affect their ability to develop socially, such as the way they interact with classmates.

When it comes to sexual behavior, many parents don’t know how to differentiate between what is considered “normal” and what is considered “abnormal.” Although it is perfectly normal for boys to be discovering their sexuality during this time, there are several signs that he is dealing with a behavior disorder. For example, coercive behavior, such as trying to convince other children to engage in sexual activity or touching them inappropriately are immediate red flags. Additionally, obsessive sexualized behavior like pornography addiction is also a warning sign.

Speak With An Expert

These are just a few general bad behaviors you should be aware of. It’s important to remember that just because a child or young teen experiences these issues doesn’t mean they aren’t ashamed of them. Rather than shaming or punishing them, you should seek help from a behavioral therapist who can create a customized treatment plan for your child. Here at Kaizen Academy, our residential treatment program focuses on replacing destructive habits with constructive ones so that your son can learn to deal with problems in a healthy way without anger or frustration. If you have any questions or you’d like to learn more about our program, give us a call today.